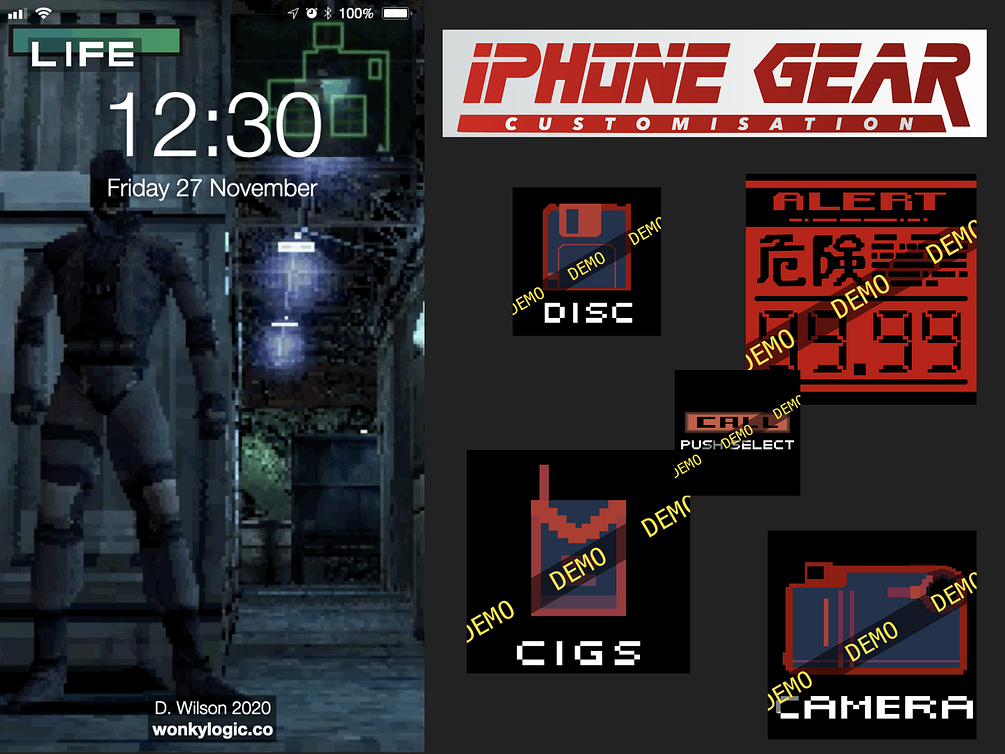 The eight icons are based on items / objects in Metal Gear Solid. These icons retain the blocky characteristics of the original artwork from the game, they are png format.

The animated lock screen is a Live Photo (compatible only with 3D Touch enabled iPhones).  It is based on a scene of Metal Gear Solid with Snake being discovered by a guard and the alert timer starting.  The guard discovers Snake, attacks him (reducing his Life bar) and the map switches to the Alert timer.  A 3D Touch iPhone can set this animation as the lock screen wallpaper.  Instructions for adding the animation to the Lock Screen are included in the sale items.  When played from the Photos app the Live Photo plays audio to accompany the animation: alert sound on spotting followed by the alert theme music.

A still version of the scene is also included without the map which makes a great home screen wallpaper.

You can request the Lite animated Lock Screen to get a feel for how they look on your phone prior to purchase.

The Item Pickup sound is included as m4r, m4a and mp3.

1. Live Photos can only be distributed by iMessage.  After the sale you will be contacted by email to obtain your iMessage contact detail (phone number or email address associated with iMessage) so that the Live Photo can be sent to you.  The Live Photo cannot be downloaded directly from Gumroad.  There is a placeholder PDF included with a note about receiving the animation via iMessage.

3. In order to use the icons as customised app icons on iPhone you need to have the Shortcuts app installed.

4. It is the buyer's responsibility to ensure that they have an iPhone that supports Live Wallpapers. Haptic Touch or 3D Touch enabled iPhones are model iPhone 6S or newer.  (iPhone SE both generations do not support live photos.)

See it in your library

View in Library
Sorry, this item is not available in your location.
Sold out, please go back and pick another option.

Your purchase was successful!

We charged your card and sent you a receipt

Thanks for your purchase. I will be in touch by email to arrange the transfer of the Live Photo.

Good news! Since you already have a Gumroad account, it's also been added to your library.